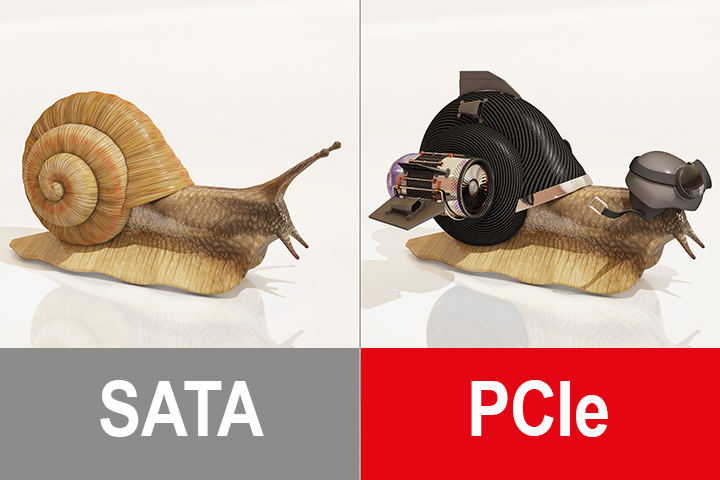 If you want to massively accelerate data transfer in your application, then there is no way around a PCIe® SSD.

But why do you now see "snails" of all things when we talk about a "turbo change" in SSDs?

It's about the interface in the case, because not all SSDs are the same. We can definitely talk about a "turbo change" when you switch from a SATA to a PCIe® interface.

With the introduction of Serial ATA (SATA) in 2000, it was possible to transfer data serially (bit by bit). Higher compatibility, speed and storage capacity, set new standards in the world of storage.

The PCIe® (PCI Express) interface, introduced in 2003, replaced it as the latest high-bandwidth interface in 2020 as the best-selling SSD interface.

PCIe® uses the so-called "lanes" for data transfer. These consist of four traces each, two of which are used for sending and two for receiving data. The interface can have from one or 2, over 4 and 8 up to 16 lanes, which results in an increase of the data rate.

Due to the larger number of channels, even PCIe® modules from the entry-level class achieve two to three times higher speeds than the older generations of SATA 3.0 SSDs.

In practice, these values can vary greatly, especially under the influence of temperature! More about this can be found in the section "Thermal behavior..."

Form factors & capacity:
PCIe® interfaces can be found in any form factor. Among them the classic 2.5'' U.2, with the x4 PCIe interface or also the further development U.3.

But also the classic M.2, in its slim design, brings the performance of the interface with it. And for those who want it to be very compact, there is the CFexpress® card or even smaller, solderable BGA solutions. Capacities from 32 GB up to 32 TB, offer you a wide choice.
So you can be sure to find the right solution for you!

Thermal behavior of SATA and PCIe®
The already mentioned high performance values also require equally powerful controllers. PCIe® controllers therefore have the characteristic of generating significantly more waste heat compared to SATA controllers. Therefore, almost all PCIe® modules have a thermal choke to protect the controller from overheating. This mechanism is usually divided into different protection levels, which reduce the data rate when temperatures increase. This can lead to strongly fluctuating performance values. However, there are features in industrial-grade PCIe® SSDs to reduce these fluctuations. Schematically, this can be represented as follows: 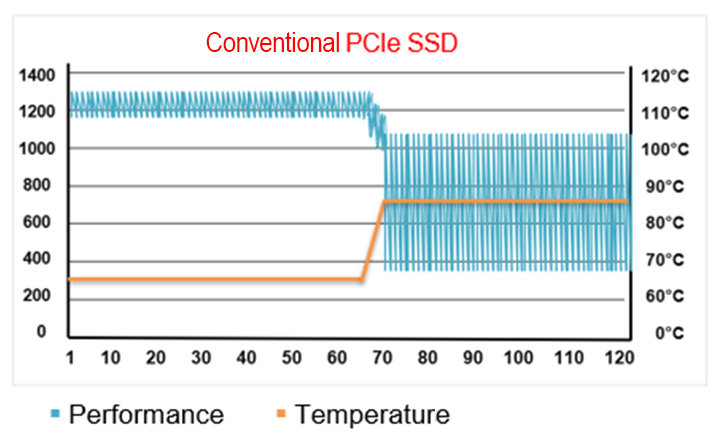 High-end but selection without end !

PCIe® modules are particularly characterized by their fast interface and maximum performance with low power consumption. In industrial applications where large amounts of data have to be analyzed as quickly as possible, the interface can show its strengths.

With GLYN as your partner at your side, you will receive professional and reliable support. Starting with the selection & individual configuration of your solution up to the complete implementation in your application.

Take advantage of our expertise in the design-in process. Enjoy the benefit of reliable processes when selecting the right SSD and get expert advice.

We will be happy to provide you with further information upon request. Extensive customization options, such as heat sinks and airflow calculation and much more are waiting for you!