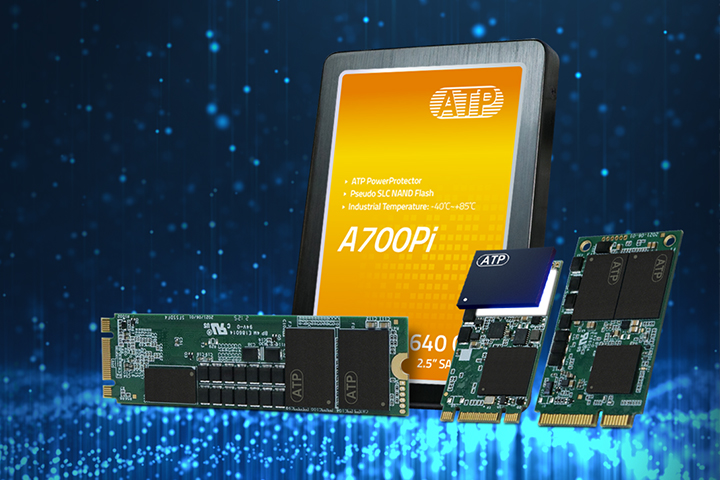 This unique performance is achieved by the new models of the manufacturer's A700Pi/A600Si/A600Sc SSD series. Based on new 3D TLC (Triple Level Cell) NAND Flash technology, this strong endurance is achieved.

Optional AES-256 encryption
The capacities of the A600Si/A600Sc series, native TLC configurations, range from 120 GB to 1920 GB. The pSLC-powered A700Pi SSDs from 80 to 640 GB. There are also SATA models with AES-256 encryption that support the Opal 2.0 security standard for projects with appropriate requirements.

"Industrial users were initially sceptical about using TLC technology. However, ATP has gone all out to meet and exceed the standards of MLC and SLC flash. With the new SSD models of the A700Pi/A600Si/A600Sc SSD series, ATP has succeeded in doing so," explains Benjamin Fasel, ATP Product Manager at GLYN, about the revision of the manufacturer's 3D TLC SSDs.

With new fail-safety and validations, ATP SSDs set standards in the market. Testing for reliability is an essential part of ATP's production. In addition to demanding standard tests, the embedded SATA SSDs of the next generation also undergo other relevant tests:

On the new SATA SSDs of the A700Pi/A600Si series, the protection against sudden power failure has been extended by a programmable MCU. This can now respond to varying temperatures, distinguish voltage drops from fluctuations and limit inrush current for better compatibility with host systems.

Take advantage of our expertise in the design-in process. Enjoy the benefit of reliable processes when choosing the right SSD and get expert advice.

Request technical information or order release samples today. We will be happy to provide you with further information on request.